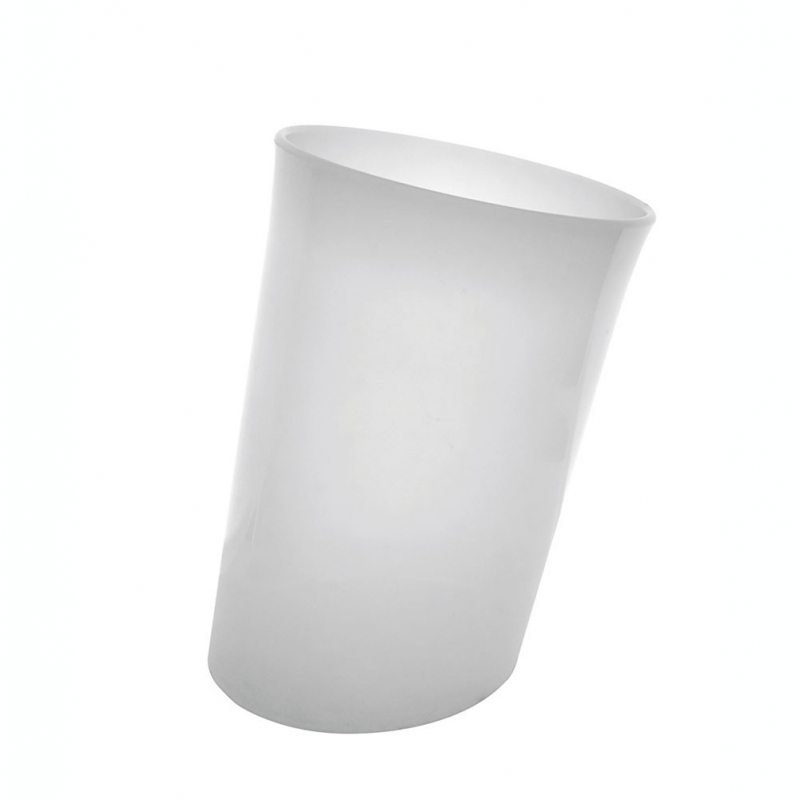 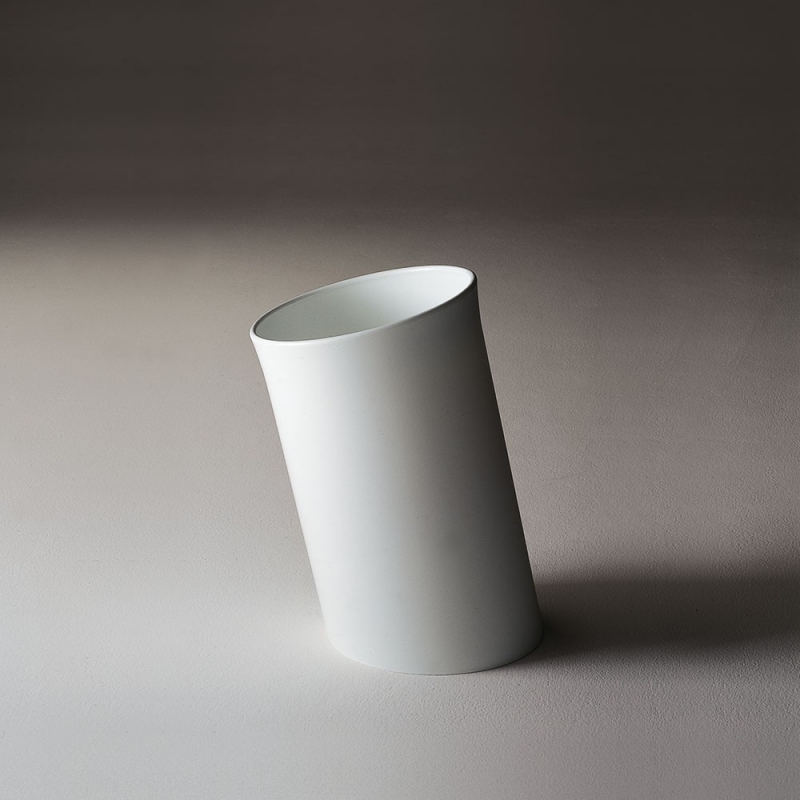 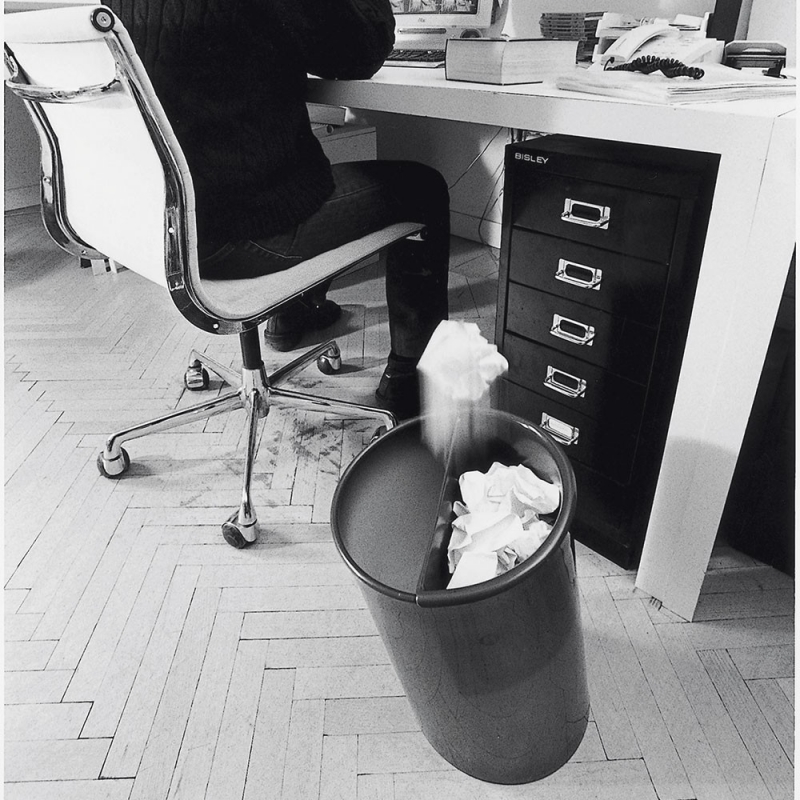 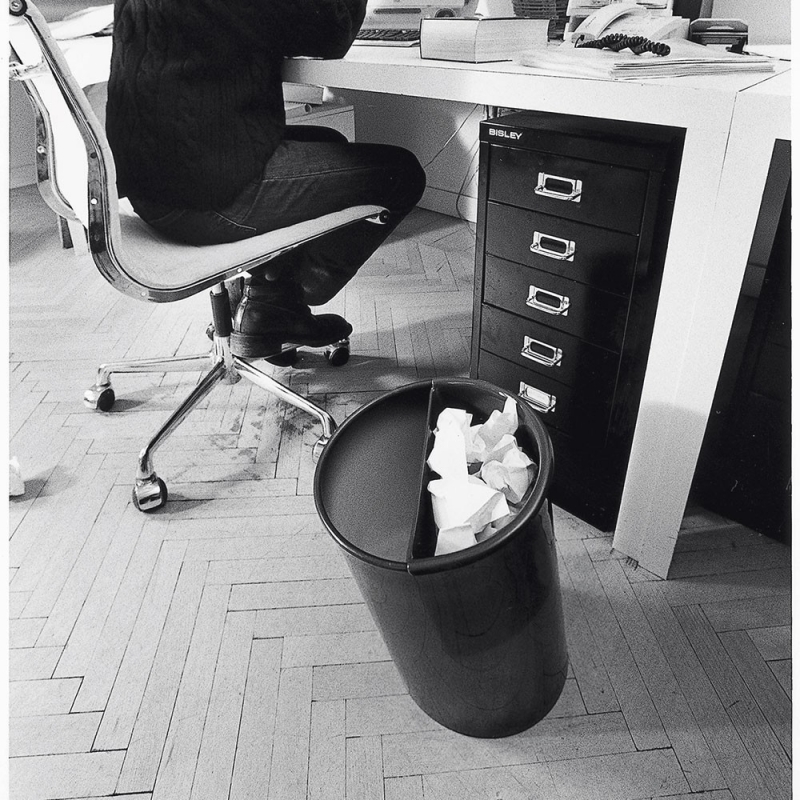 In 1970’s, Enzo Mari design for Danese a series of objects for offices and public environments.

The designer and Bruno Danese agrees about the relevance of those environments in everyday life, important like domestic places.

The bin “In attesa” (numbered from the author n°1042) is designed by both Enzo Mari and his brother Elio and was produced in 1971.

A cylinder in injection-moulded polypropylene to be used as wastepaper basket which stands out from a contemporary production of such objects because of a diagonal cross-cut at the base, making it slightly inclined and thus better positioned to receive waste.
It suits both public spaces, the office as well as domestic environments.

Enzo Mari was born in 1932 in Novara. Since the time of his studies at the “Accademia delle Belle Arti” in Milan, he had an intensive artistic activity, with personal and collective exhibitions in various museums of contemporary arts.
In 1963 he became the coordinator of the italian group “Nuove Tendenze” (New Trends), caring in 1965 the exhibition of optical kinetic, and program-art for the “Biennale” of Zagreb .
He took part of variuos editions of the “Biennale” of Venice and the “Triennale” of Milan. In the same period he started his activity as designer, at the beginning with personal research, later in collaboration with various companies in grafic and editorial areas and in the sector of industrial produkts and the organisation of exhibitions.
Characteristic of his complete work, which is presenting one of the most popular of the Italian Design, is the continious research and experimentation of new shapes and signifities of products, even being contrast with the traditional mould of Industrial Design.
In 1971 Enzo Mari was participating on a critical speech at the exhibition “Italy: The New Domestic Landscape”  at the MOMA in New York.
His position of art and design is documented in many of the published reports dedicated to his work and in the works of important associations, like the “Associazione per il Disegno Industriale” where Mari  has been president from 1976-1979. Enzo Mari received the “Compasso d’Oro” for thre times. His works and his objects are presentated in various museums of contemporary art: “Galleria Nazionale d’Arte Moderna” in Rome, “Moderna Museet” in Stockholm, “Stedelijk Museum” in Amsterdam, “Kunstmuseum” in Düsseldorf.
In 1983 an important exhibition has been dedicated to him by the “Centro Studi e Archivio della Comunicazione” of the University of Parma. Enzo Mari donated 8.500 of his drawings and elaborates to this archives.
Recently his activity is extending to the research and to plannings for urbanistic projects (Milan, project for “Piazza del Duomo) and to didactics, performed with conferences and courses of lectures in Italy and in foreign countries. Among them, he gave courses in the “Istituto of Storia dell’Arte” of the University of Parma and in the faculty of Architecture of the Politecnico in Milan.